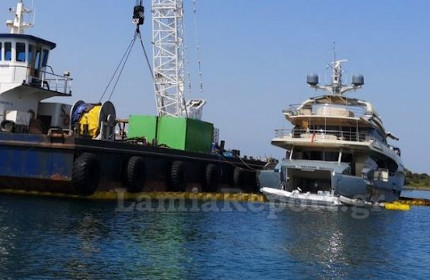 In the final stage for its detachment and removal from the shallows of small Lichadonisi, is the impressive yacht “ALMAHA” flying the flag of Cayman Isl., which with 5 crew members and 10 other passengers ran aground at the spot at 04:05 on Tuesday morning (27/7).

According to the report of LamiaReport, in the presence of Aidipsos’ Harbormaster and Coast Guard’s Commander Sotiris Danikas, who was one of the first people to be at the spot in order to provide assistance to the passengers, a well-known company has undertaken the difficult task of detaching the 41.40 meter yacht.

On Saturday morning (31/7), a floating crane arrived at the spot and started the transfusion of fuels and lubricants, in order to remove anything dangerous for the pollution of marine environment.

Follows the temporary repair – sealing of the cracks by a special diving crew, so as the yacht to be detached from the reef and then to be towed safely in the ship-repair yard in Perama, Attica.

The operation, as we noted, has been undertaken by one of the best companies in the industry and works are being carried out under the supervision of Aidipsos Port Authority, which performs the preliminary investigation regarding the incident.

Τhe 10 passengers who were aboard of “ALMAHA” had been safely removed from the spot since the first hours with the assistance of the Coast Guard and a pleasure craft, while the 5‑member crew remained on board, all in perfect health.

Watch, also, an impressive video from… Up Stories team in cooperation with the LamiaReport: