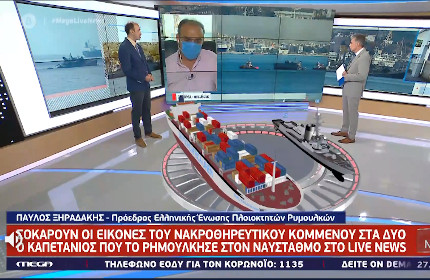 “Callisto”: The captain who towed the minesweeper in MEGA Channel

The President of the Hellenic Shipowners’ Association, Mr. Pavlos Xiradakis, spoke to LIVE NEWS and Nikos Evangelatos about the collision between the giant Maersk Launceston and the naval ship “Callisto”.

The collision of the minesweeper vessel of the Hellenic Navy “Callisto” with Maersk’s large container ship was fierce, the President of the Hellenic Association of Shipowners’ mentioned.

Mr. Xiradakis highlighted the fact that there was no loss of human life.

“It was a miracle that all the 27 crew members were rescued, unlike Merlin which had 45 casualties,” he noted.

When questioned whether the Portuguese captain of the merchant ship is responsible for the collision, he said: “We cannot say that, monthly more than 1,000 ships are berthed in Piraeus, which is a transit port, these ships are modern with fixed timetables, so these speeds are normal, we don’t know exactly what happened.”

“The Naval Accident Investigation Committee of the Navy and the Coast Guard have collected the data and will shed light on the case”, he added.

Finally, he referred to the perfect cooperation between the Navy and the Ministry of Maritime Affairs and Insular Policy.