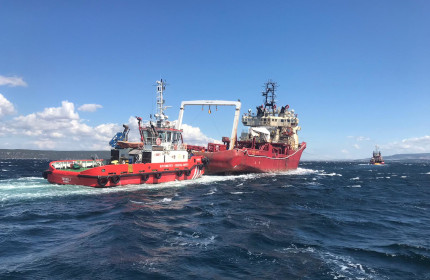 On 19 August 2021, the craned Bulk Carrier M/V “NAVIOS AMARYLLIS” (GT 32,415 – DWT 58,735), grounded on Rasfari Reef in the North Male Atoll, Maldives. The vessel was on a voyage from Tuticorin, India to Saldanha Bay, South Africa, in ballast.
On the same day, Tsavliris mobilised tugs, namely the AHTS “VIRGO” (BHP 13,500 – BP 155) and “ ‘MAHA WEWA” (BHP 3,148 – BP 45) from Sri Lanka to her assistance. The salvage services developed into a major operation. Tsavliris assembled a fleet of support vessels (several highspeed workboats, two landing crafts, two barges, forklift, crane trucks etc). Additionally, an array of salvage equipment was airlifted from Dubai and Athens (including hydraulic pumps and accompanying hoses, powerpacks, also air compressors, antipollution booms, skimmers, dyneema ropes, drones etc).
All necessary environmental precautions were adopted in order to protect the environmentally sensitive area including encircling the vessel with a large inflatable boom. Tsavliris cooperated closely with the local authorities and engaged first-class subcontractors, including Environmental Pollution specialist “Polygreen” (Polyeco Group).
Before refloating the vessel, about 1,600 tonnes of bunker fuel and lubricants were transferred from lower to topside tanks to avoid any pollution risk. Underwater sealing of cracks was undertaken by divers team.
On 29 August, the casualty was successfully refloated without any oil spill and was anchored at the Male VLCC Anchorage Area. Tsavliris prepared the vessel for oceanic towage to repair yard.
The vessel dragged on numerous occasions due to adverse weather conditions (8–9 B) but was promptly supported/stabilised by the AHT “VIRGO which remains alongside the vessel pending departure under tow. 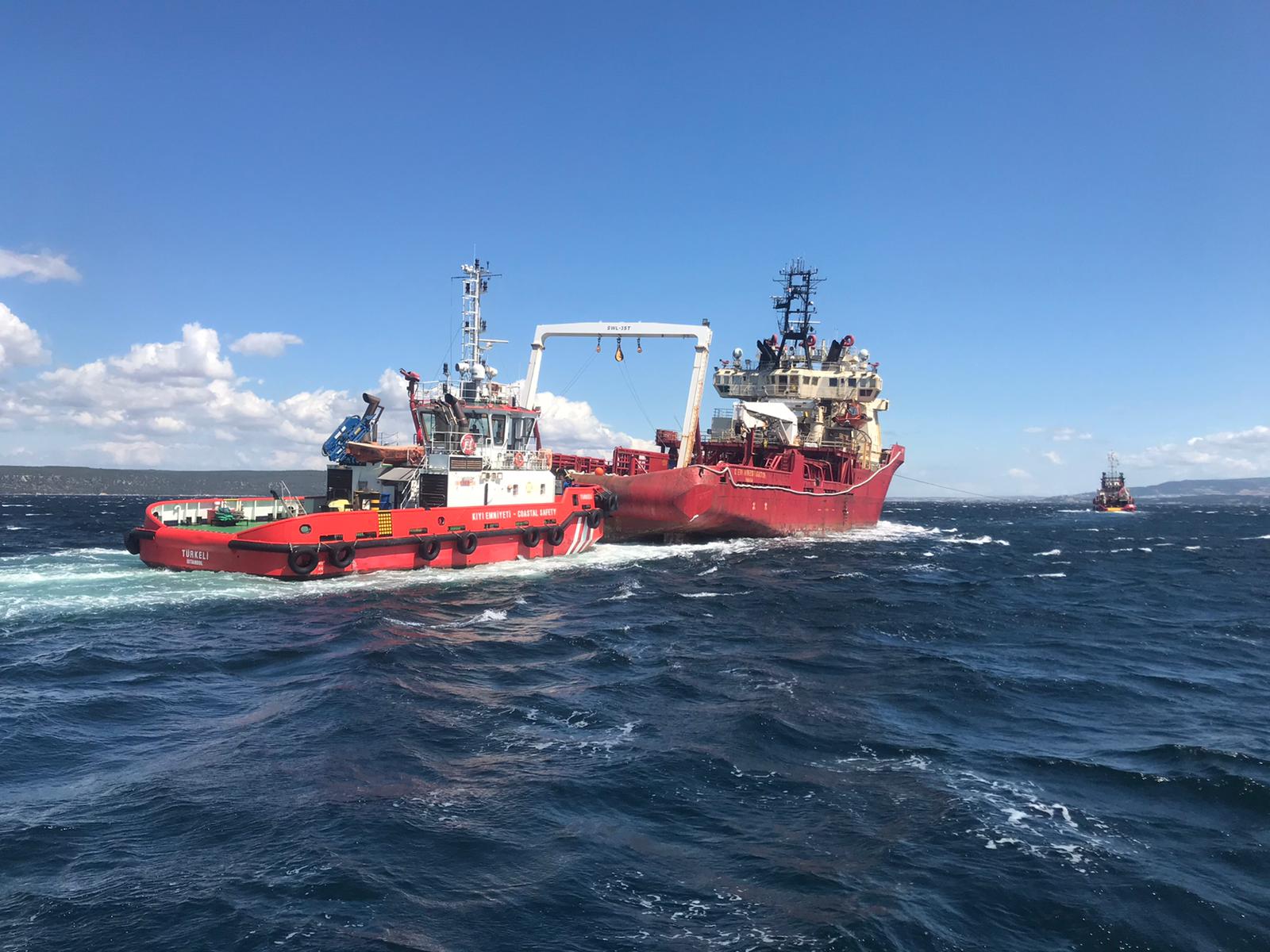 In September Tsavliris arranged towage of the Rescue/Survey Vessel “OCEAN INVESTIGATOR” (GT 3,327 – DWT 2,690) from Ambelaki, Salamis Island, Greece, to Tuzla shipyard, Turkey, for maintenance/repairs.
Tsavliris despatched the AHTS “FOTEINI Z” (GT 495 – BHP 5,150) from Piraeus and towage commenced on 3 September. Due to adverse weather conditions (gale force winds 8 B and waves of 4 m.), the convoy altered course on 6 September in order to shelter for two days in the area south of “Turkeli Adasi & Pasalimani Adasi”.
During the Canakkale Strait passage, a coastal safety tug provided escort services. The convoy arrived at destination on 10 September and the operation was successfully completed on 12 September. 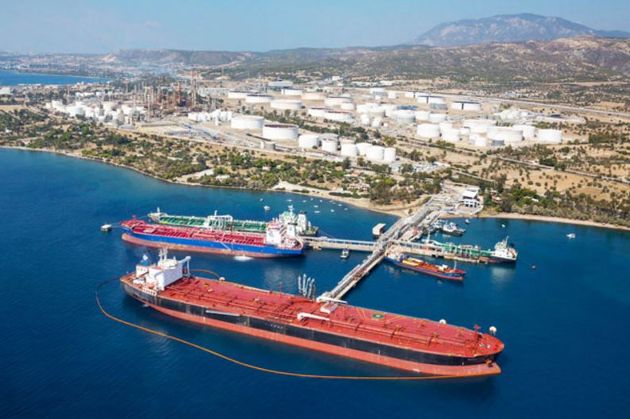 In September 2021, Tsavliris were mandated by Motor Oil Hellas (Vardinogiannis Group) to assist with their new project: an open sea anchorage at the energy group’s refinery, which is located in Agioi Theodoroi, Corinth, Greece.
Motor Oil had installed 14 large-scale anchors (connected in groups through a sinker to a mooring buoy) in order to accommodate large vessels up to the size of ULCC; one of the few ports in the Mediterranean that can accommodate such capacity.
Tsavliris deployed the AHTS “LEADER Z” (BP 130 – BHP 11,040), in conjunction with tug operator Zouros, for the tensioning tests of the mooring buoy anchoring system (pulling each anchor at over 125 tonnes). During the procedure, two of the anchors were dislocated and had to be securely reinstalled.
This was a complicated project involving extra safety measures and special calculations. The operation was completed successfully on 10 October. 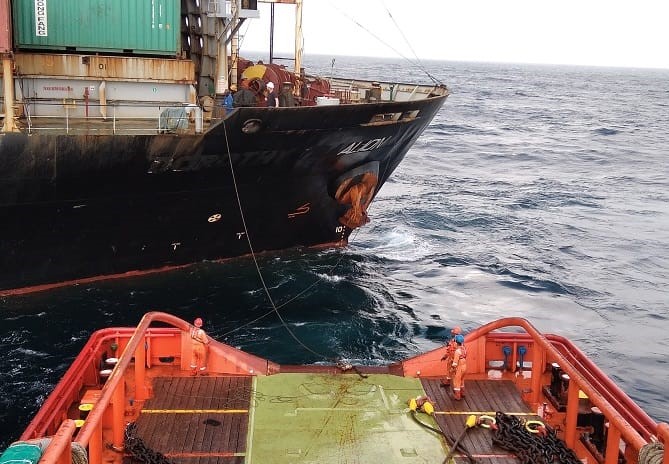 In September 2021, the Geared ContainerVessel“ALION” (DWT 16,800 – GT 13,764), laden with 548 containers, experienced main engine breakdown off Duqm, Oman. During the incident the vessel was on a voyage from Mumbai, India, then Jebel Ali, UAE, to Mombasa, Kenya. Four armed guards were onboard due to passage through a high-risk piracy area.
On 21 September, Tsavliris despatched the AHT “TEJA” from her salvage station at Duqm to the assistance of the casualty, which at the time was adrift in the Arabian Sea, about 320 miles East of Socotra Island.
The tug arrived at the casualty’s position, on 24 September but due to adverse weather conditions (wind/waves/swell), tow connection was aborted following damage to towire and fender. Tow connection was made the next day and towage to Sharjah, UAE, commenced.
On 25 September, professional agents were appointed by Tsavliris to provide assistance to both tug and tow at port of Sharjah. On 2 October, the four armed guards disembarked the vessel by launch to their designated armoury vessel OPL Fujairah.
On 3 October, Tsavliris arranged for an assisting tail tug prior to approaching the congested anchorage area. On 5 October, the convoy arrived safely at Mina Khalid port, Sharjah and with the assistance of pilots (sea pilot) and port tugs (all arranged by salvors) the vessel berthed alongside at North Wharf. On 6 October, the tow line was disconnected and the operation was successfully completed.